Just as the trees started showing signs of Autumn on Vancouver Island, the leaves had dropped and the snow was already beginning to hit the trails in Northern BC. It was the second week of October, and it was “now or never” to check out the amazing riding up north before mother nature put a final stop to the mountain bike season.

This action-packed/whirlwind trip was hectic on paper, but we wouldn’t have traded that week for anything else. In just 7 days we visited 6 towns, 8 breweries, and more trails than we could keep track of.

Day 1 of the trip kicked off in Prince Rupert. The raw-beauty of this town had me in complete awe. Although there were no bike trails here, it was the perfect place to unwind and explore after a long travel day. Craig of Wheelhouse Brewing gave us a warm welcome, a tour of the place, and shared his personal story of starting the business as we chugged down a couple fresh Thousand Mile IPAs. The craftmanship and passion put into the beer and the business was inspiring, and this set the vibe for the entire trip. All these small breweries in Northern BC are run by passionate individuals who seem to value community and friendships above all else.

This isn’t your fast-paced city lifestyle. People live here for that reason, and that theme also translated to the trail. The bike trails in Terrace, Smithers, Prince George, Valemount, and Quesnel were all shockingly fresh and untouched. And the most popular ones were still in mint condition. I think this is due to low trail traffic and very strong riding communities who give back to the trails.

Everywhere we went, we stopped for photos at every exciting opportunity. We chased local legends down their favourite tracks, and we fought through the cold riding conditions knowing there would be beer waiting for us at the end of each ride.

On day 2 we did a climb up Terrace Mountain to ride Shangri La- a trail everyone had been raving about. In terms of sanctioned trails, this is one of the best I’ve ever rode in BC. It was the perfect mix of flow and technical. After a few runs on there, it was time to treat our local guides to lunch at Café Zesta. We were super thankful for everything already and the day had just begun! From there, we moved over to Copper mountain for some high-speed downhill shuttles.

Our new friends met us at Sherwood Mountain Brewhouse that night and we reminisced over how awesome the day was. Liz from Tourism Terrace was also bartending. Everyone is so closely knit and friendly. This theme continued… Day 3 in Smithers is a day I will never forget. We drove up high and the trails were icy, yet fast, flowy, and creative. Wooden structures built up on rock features and unique line choices had us smiling all day long.

Once the day was winding down, our bodies were beat and our bikes were completely caked in mud. I gave Dave from Bulkley Valley Brewery a ring and told him we were coming. We rolled up to the building and saw him waiting for us. Dave sported a giant smile, beers in hand, and a hose in the back for washing off bikes. This was legendary! I then sampled some of the beers, we shared riding stories together, and before I knew It… a couple hours had passed and Dave had dinner being delivered to us. Out of all the breweries we visited, this place was my favourite. The genuine connection we built was unforgettable.

Cole Pellerin Photo To make the night even better, we checked out Smithers Brewery, and there’s a reason it was the busiest spot in town. It’s the local’s favourite place to party on a Friday night. Not only did they have their own delicious beers, but I noticed some of Bulkley Valley’s brews on-tap. This was a pattern across all of Northern BC because these breweries tend to all have each other’s backs. The next morning, we had a 4.5-hour drive to Prince George, the biggest town with a very developed trail network. I can’t even remember all the trails we rode because it was non-stop all day. The terrain was smooth and sandier than I expected. This made for really fun, high speed trails.

Cole Pellerin Photos The two breweries in town, Trench and Crossroads, were both the biggest ones we had visited. Wide open inside, a great selection of beers, and large seating areas. Trench’s darker lighting and more rustic décor gave it that vibe of being in a Northern town. Crossroads was right in the city center, more modern, and had a large food menu.

After our day in Prince George we had another long drive out to Valemount. Who knew this town of 1000 people would have the most developed, free bike park I’ve seen in the world!? And it’s paid off… big time! Michael from Three Ranges Brewing has seen a large spike in sales thanks to the mountain biking community, and I’m sure many other businesses have experienced the same. It’s so awesome to see the Province invest in mountain biking to bring these communities to life. We didn’t even get to ride the upper trails because of the snow, but the lower trails still had us more than satisfied. Put Valemount on your bucket list because it’s already one of the best places to ride in the world.

The final spot was Quesnel, where we linked up with the Gold Rush Cycling Club and let them know we wanted the most gnarly stuff we could find in just a few short hours before we had to fly home. Local trail directors, John and Chris, took the lead and gave us the biggest surprise of the trip: a steep, slippery, rocky, terrifying line called “Rockasaurus”:

In the dry it would have been a challenge for most advanced riders, but in the snow, we were on our toes. The beautifully thick moss and flow sections mixed with advanced technical was such a thrill. I got to the bottom shaking for more. John was nice enough to let us have showers and pack up our bikes at his house before heading to Barkerville Brewing. We were very stoked by this hospitality and friendliness, no matter what town we visited, it didn’t stop.

After some high fives, hugs, and laughs at Barkerville, it was time to fly home. I still can’t believe how lucky we got with the weather, but more importantly, I will cherish the great friendships we made and business owners we met along the way. Northern BC is a true gem. Thanks to the BC Ale Trail for this special opportunity. 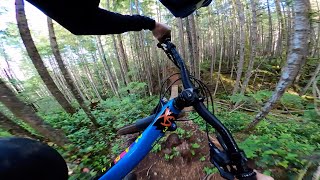 My Jump Trail Made the GoPro Best Line Finals!